One week ago, I came home from a Friday evening out to hear about the horrifying events in Paris. Immediately, my heart jumped to my few friends currently on exchange there, whipping out my phone to check my social medias, ensuring that they were alright. Thankfully, everyone I know was okay.

It’s terrifying to think how close to us this all is, in the Western world. The people of Paris were simply enjoying their Friday nights, celebrating the end of the week by going to concerts and sports games and clubs, just the same as I was doing across the ocean in Toronto. All those brothers and sisters and husbands and wives and friends and sons and daughters lost and injured – and you come to the realization of just how easily this could have happened in your city.

But while the attacks in Paris were certainly appalling, what is absolutely bone-numbingly sickening is how this terror is the daily life of so many in the world. As the internet exploded with sympathies for Paris, mentions of similar attacks in Beirut only the previous day were only a quiet murmur. The tragedy in Paris feel closer to us because of the way our world is aligned, but that does not mean that what is happening in Lebanon and in Iraq and in Syria should not tug at our hearts in the same way.

With all the tensions around the world right now, it’s easy for us to feel helpless as we stare in horror at , or to get caught up in taking sides and trying to play at-home world leader. But if you, like me, live in a place relatively untouched by this kind of violence, I think it’s more important than ever to be aware and accepting and thankful.

And so it’s fitting that American Thanksgiving is approaching. Although I’m Canadian to the core, it’s a good reminder to be grateful for all the things I am blessed with.

Such as these magnificent pumpkin pie bars.

I made these with a childhood friend a few weekends ago, both of us now living in Toronto, across the country from our hometown. It was fast and easy, perfect for us as we distractedly threw together ingredients, giggling and chatting and catching up as batter splattered out of the bowl and pumpkin spice exploded onto the counter.

Pumpkin Pie Bars
Recipe adapted from Some the Wiser

Begin by preheating the oven to 350°F.

When in doubt, your fingers are your best tool – with them, combine the ingredients for the crust until they resemble coarse oatmeal. Reserve 2/3 c of the mixture to use later as a topping. Pull out a 9×9 baking dish and press the remaining mixture in. Slide into the preheated oven to bake for 15 min, and then let it cool slightly.

While the crust bakes, combine the filling ingredients in a medium bowl. With an electric mixture on medium speed, blend until the mixture is smooth. Pour the mixture over the baked and cooled crust, and sprinkle the crust topping you saved overtop. Pop the dish back into the oven, still at 350°F, for 30-35 minutes, or until the bars are firm. 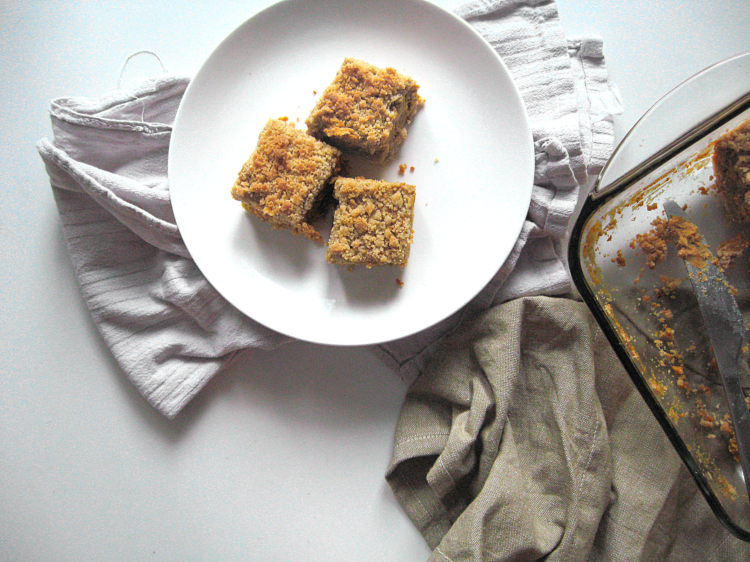 Let cool slightly before eating. Or don’t. The warm bars will be soft and melty in your mouth, albeit slightly harder to remove gracefully from the dish.